ACTIVITIES AND PLACES TO SEE 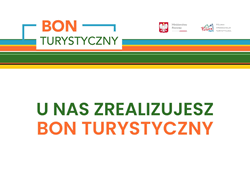 Proximity of nature and colourful landscapes make Nidzki Hotel and Nidzki Recreation Centre an ideal place for rest and relaxation. The hotel located at Nidzkie Lake is an important point on the tourist map of Poland. Visiting guests value the possibility to rest near the lake, and to perform many sport activities during each season of the year. The neighbourhood is rich in historical treasures and places that will surely catch the attention of many visitors, not only of the history lovers.

The facility built in 1880 placed its mark in the history of the region thanks to Konstanty Ildefons Gałczyński’s passionate affection for that place. The poet visited this place very often with his wife in 1950 - 1953, until the unexpected death of his beloved.

Monastery of Old Believers in Wojnowie

The structure was created in 1850s, when Eastern Orthodox Church followers began to appear over the Duś lake. Unique icons can be seen in the facility.

Wooden building from 1920s. The facility was built based on the pattern of Russian Orthodox churches from the region of Twer.

Located within the area of the Masurian Landscape Park on the midforest fields that provide outstanding living conditions for wild animals. Many endangered species or species threatened with extinction are present on this area of 100 hectares.

Facility of Polish Academy of Sciences appointed over forty years ago. Striving to enrich and save national nature resources was the foundation of its establishment. Its known in Poland and Europe for the free breeding program of Konik (the Polish primitive horse).

The main communication junction between the Bełdany lake, Mała Guzianka and the Nidzkie lake. It constitutes the compensation of over 2 metre water level difference. It’s one of the most vital points connecting into the route of Great Masurian Lakes (szlak Wielkich Jezior Mazurskich). The facility has been working continuously for over 100 years!

Canoeing route on the river Krutyń

Uncommon communication water tract, mainly used for tourism and recreation purposes. Gentle stream and level of the river allow for safe rafting and canoeing even for inexperienced people, and families with children.

The distance of 46.5 km for the fans of four wheels! It’s currently the longest cycle lane in Ruciane – Nida commune. It leads through wild, uncivilized, but beautiful forest areas.

District of the Great Lakes (Kraina Wielkich Jezior) is the region of Poland where the Winter never lets people down. That’s why Ruciane – Nida is a very popular place for all lovers of cross-country skiing, sleigh parties and family activities and fun in the snow.

Forests surrounding Nidzki Hotel and Nidzki Recreation Centre are a paradise for the mushroom pickers. Mazury region is called the Green Lungs of Poland for a reason. This is the place where mushroom pickers from the whole country come during autumn. Many of those visitors return in the following years.